One of the most exciting aspects of my new role with [email protected] is working to develop the internal skills around social. Being a general believer in and enthusiast fan boy for social technologies my approach is pretty much just to get as many people using them as possible. While all of the behavioral economics and social media theory is important to have as a background, I’m of the view that once you’ve felt the visceral pleasure of being re-tweeted, it’s a lot easier to ‘get it’. It’s what’s known in the tech world as ‘eating your own dogfood‘.

However with busy work schedules, clients demands and a great deal of non-social business already to deliver it’s not always as easy as just saying ‘ get on the twitters: you’ll loves it’. So to engender a sense of fun and competition into the process we’ve worked with Andrew and Jodee at Kred to develop the Ogilvy Social Climbers leader board: http://london.kred.com/ 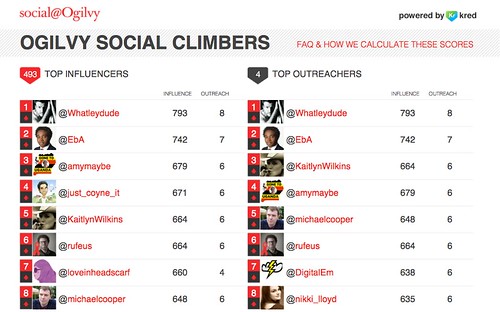 The leader board uses Kred’s algorithm to assess the Influence and Outreach of the participating Ogilvy staffers relative to the rest of the participants. The person who improves their score the most over the year will attend SXSW Interactive 2013 as the social correspondent for Ogilvy London. Along the way we’ll be giving out monthly prizes for new entrants, high scores and epic acts of outreach.

Currently the scores are based exclusively in each participants twitter activity, however in the coming months we’ll also be adding Facebook and Linkedin.

At 61 participants as of Sunday March 4th we’re at about 5% penetration of the Ogilvy Group UK after only 2 weeks. My goal is to get it to 25% of the entire agency by the end of the year with an even spread across the operating companies and roles. I’ll post quarterly updates and let you know what strategies we’ve been using to drive involvement. I’d be delighted to hear of success you’ve had in your organisation, especially if I can share it here.

If you are an Ogilvy London employee and you’d like to participate just shoot your twitter handle to [email protected] And don’t be put off by the high scores of the likes of @Whatleydude and @Eb, the prize is for most improved, not highest score.